The past several decades have witnessed a flourishing Sami tourist economy, despite the harsh conditions of northern Scandinavia.

As agrarian development, mining, logging, and other social processes continue to threaten the nomadic lifestyles of herding Sami groups, increasing numbers of individuals are turning to tourism for extra income.

There are certain risks to developing tourism in Samiland (McLeod 2006, Broadbent 2006, Rydving 2006). Opportunities to experience "authentic" Sami ceremonies have been promoted through tourist offices, particularly in Finland. These offices sponsor shows and demonstrations featuring non-Sami dressed in inaccurate replications of Sami garb, mixing specific gender and regional elements. Touristy gift shops in the region sell reproductions in the guise of authentic Sami craftsmanship. One popular "ceremony," crossing the Arctic Circle, touted for its authenticity as a Sami tradition, has no actual significance in Sami spirituality (McLeod 2006). Sami culture is conflated with images of Santa Claus and his reindeer, and Samiland is touted on tourist brochures as "the home of Santa". Courses on "shamanism" pretend, in less than a week, to teach what took years, if not a lifetime of training, to become a noiade in the sixteenth century (Rydving 2006). Jewelry is a very popular trade item. As jewelers were traditionally outsiders, tourists will often find other cultural motifs on "typical" Sami jewelry. Indeed, the tourist industry, while it provides an income for much of the Sami population, has also made them a veritable commodity in the world market. 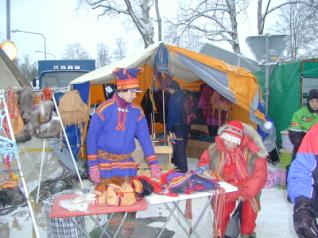 Despite tremendous oppression, many Sami have secretly maintained their language, culture and spiritual beliefs and practices, and have begun to recover from the aggressive assimilation policies of the past centuries. Rather than the traditional "Laplander," a derogatory term coined by colonists in reference to Sami patchwork clothing, today they are formally recognized as "Sami" which means "the people." They now have their own flag and national anthem, both created in 1986. For the purposes of land and other indigenous rights, the Sami consider themselves one people with a common origin (Jönsson, cited 2006). They are active in international indigenous organizations and have status as a registered nongovernmental organization in the United Nations.

Finland, Sweden, and Norway now have laws and programs in place to safeguard and promote Sami language and culture. In 1973, 1987 and 1992, the Finnish, Norwegian, and Swedish governments respectively established a Sami Parliament to be elected by and represent the Sami people. Public authorities are now obliged to consult the parliaments on matters that might affect Sami land, livelihood and culture. In Russia, where the fall of Communism is still recent history, the Kola Sami do not have their own parliament or the legal protections of their Scandinavian counterparts, but they participate in national and transnational Sami organizations and international indigenous bodies (McLeod 2006).

The strengthening of the Sami movement in the 1960s gave credence to their position as an indigenous culture under pressure from a majority culture (Shaw 2000). The use of the Sami language, and the interest in Sami history and culture became paramount for the Samis' own identity and began to represent a valuable heritage (Eidheim 1997: 33-35, Shaw 2000: Folklore Fellows).

Though the Sami now consider themselves one nation, the variety in dress in a traditionally nomadic group still speaks volumes about the prominence of regional differences in Sami identity construction. Though national borders are not significant factors in determining Sami cultural differences, for the purposes of this website it is helpful to at least show the variety of Sami costume in each nation with a Sami population.

The annual winter festival in Swedish Jokkmokk has been held for the last 400 years. It started as an initiative from Swedish King Karl IX, who started instituting public marketplaces in northern Sweden in 1605 (Pettersson 2003). In 1606 the first fair was held in what is now the town of Jokkmokk. Besides selling utilitarian and decorative items, the fairs provided public occasion for baptisms, marriage ceremonies and even trials. Initially, the fair was held around the 25th of January and lasted for two to three weeks, but became shorter over time. In the 1930s, it lasted only two days. The festival has undergone considerable tourism development. Sami from all over the north of Scandinavia arrive in town for the first weekend of February and buy and sell the things they need for the year. Traditionally, knife blades, axes and reindeer were sold. Today these items are still sold, alongside snowmobiles, mobile telephone covers, and sealskin jackets.

The festival, thanks to continuously added attractions, has been able to retain a rather high level of popularity, despite a peripheral location at the Arctic Circle in northern Sweden (Pettersson 2003). 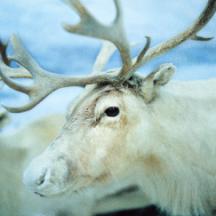 A reindeer with lighter winter fur.
Displayed with permission from Ralf Holström, photographer 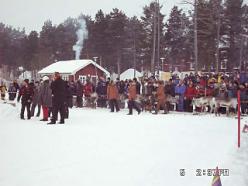 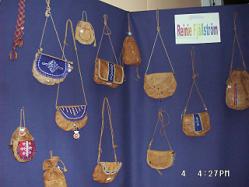