The Nordic Bronze Age (1800-600 BC) is most significant for the introduction of a new material rather than cultural change. Agriculture and husbandry on the mainland and fishing along the coast still continued from the Neolithic Period. Social classes still continued to differentiate as land areas ruled by elite chief families were formed. Burial practices and personal ornament marked the separation of the classes, a process amplified by the introduction of metal goods.

Scandinavians traded mainly amber, along with some other objects, into central and southern Europe in return for metal artifacts and raw material. With this trade came influences in art and design from the Celtic and Roman people. In Scandinavia, metal was considered even more valuable and sacred because of its rarity. Finished imported objects were traded into the area but Scandinavian metal workers began making objects that were sometimes influenced by imported goods.

During the Nordic Bronze Age, large numbers of metal votives were deposited throughout Scandinavia, primarily Denmark. These were usually religious offerings of precious metal objects placed in the ground or bodies of water, mainly peat bogs. In some cases, humans were sacrificed and deposited as well. From these discoveries, several unique metal objects have been recovered demonstrating new artistic influences.

Grave goods intensified during the Nordic Bronze Age and elite individuals were buried with large amounts of bronze items and gold. Elite burials during most of the Bronze Age were single graves covered by a mound or large stones. Men were often buried with weapons, personal items, body ornaments, and metal vessels. Women were buried with similar items, but jewelry was in the place of weapons. In some instances, however, women were buried with daggers. The metal items in the Milwaukee Public Museum collection are most likely grave goods for higher-class individuals. All of the pieces come from Denmark. 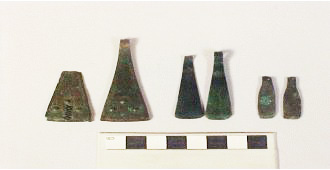 These types of tweezers would have been possessed by elite individuals and they were personal items used for hair removal. Well-preserved human bodies discovered in peat bogs as ritual sacrifices, known as bog bodies, show evidence that tweezers were used to pluck eyebrows and other facial hair.

The first tweezers shown above, and in detail to the upper right, convey a design of three raised circles with a line and triangular pattern around the rim. This design was probably influenced by the culture trading raw metal material into Scandinavia. The Celtic culture of central Europe used a similar design of circle and lines on metal ritual/votive deposit items, which can also be found on other pieces in Scandinavia.

This bronze razor or knife was probably used by men for hair removal. For elite men, it was important to keep facial hair trimmed. Shaved heads and facial hair are also seen on bog bodies.

The bronze spiral ring was a personal ornament for elite women. Spiral designs were popular for rings and arm bands during the early Bronze Age in central Europe. This design influence infiltrated into Scandinavia later in the Bronze Age.

This bronze ornament piece is small and could have been used for a number of things. The design is simple but could represent a serpent or snake. It does not have any evidence of being attached to a pin so it is likely that this piece was sewn onto clothing. It could have also been a pendant.

Bronze awls were tools used to make holes in different types of material, particularly thick leather and wood. Often, one end of the awl would be fit into some sort of a handle.

Flanged axes were used throughout Europe. The name is derived from the ridges that are along the sides of the axe shaft. These ridges were pounded into shape by a hammer or the form was created by a cast. The ridges were designed to keep the axe firm and tight in the handle. This particular axe style dates back to the early/Middle Bronze Age (1700-1500 BC) in central Europe. The central European term for such an axe is Randleistenbeil.