The Mesolithic Period in Scandinavia (8000-4000 BC) was represented by populations of semi-sedentary groups, resembling the rest of Europe at this time. The people of Scandinavia relied on wood and stone tools for living, hunting, and fishing. Chip-stone or core axes were first produced in the early Mesolithic (Figure 1). They were used for cutting down trees, possibly animal processing, and other daily activities. Axes were also used to break through ice for fishing, and frozen ground to build shelters.

The Neolithic Period (4000-2000 BC) is marked in central Europe by increased agriculture. Scandinavian cultures adopted agriculture practices as well, but relatively late because of their geographical location and some population resistance. During the Neolithic, populations were more sedentary and closely established. The forests of Scandinavia, which were spreading during the climate changes of the Mesolithic, were large and dense. This is when shaft-hole axes begin to be produced (Figure 2) as functional tools for cutting down trees. This made room for pastures and cultivation. The adze featured in the collection was also a functional wood processing piece from the Neolithic (Figure 5). This period is marked by large deforestation of Europe by firing techniques and simply cutting down large amounts of trees. The landscape of Europe today still shows the effects of Neolithic forest clearing.

The spread of agricultural practices also created societal changes. Large villages were established, and individuals relied more on social connections. The Neolithic Period sets in motion the segmentation of Scandinavian societies and the creation of an elite class. Burials and grave goods became more elaborate, with elite men buried with weapons, ceramic vessels, and other grave goods. The ground stone axe also appears in the Neolithic (Figure 3). These axes were very time-consuming to make and were used as more ceremonial pieces and status markers, besides having a possible functional purpose.

While Scandinavia did not have natural metal deposits, it did have huge resources of flint. The in situ flint deposits found in Denmark were the largest in the prehistoric world. It was deposited throughout Scandinavia by the glaciers that covered most of the area during the earlier glaciation, which retreated at the end of the Paleolithic Period. The flint available was mostly morainic and chalk flint. Morainic flint is very consistent and predictable, making it an ideal material for tool-making.

Finished flint tools were traded with other populations south of Scandinavia. Another material that was abundant and most-often traded was amber found on the beaches of Scandinavia. These items, probably along with furs, were traded later in the Bronze Age for metal ores.

Chip-stone or core axes appear in the early Mesolithic period. Chip-stone axes were produced from large pieces of flint and then broken into form. Early forms were rough and chipping was very deep. A possible example is the above axe second from left. Later Mesolithic chip-stone axes were more uniform and had well-controlled surface flaking like the example pictured at right. The refined surface flaking was accomplished by using a soft hammer, such as a bone or antler implement, to flake pieces off the flint. The axes were most likely used for heavy labor, such as tree removal and processing, and were attached to a thick, wood handle.

Shaft-hole Axes were characteristic of the Neolithic period in Scandinavia. Many of these types of axes were used for heavy labor and tree removal. In some cases however, they were used as ceremonial pieces and status markers. This axe is made of granite, not flint like the chip-stone and ground stone axes. To create a hole that goes all the way through the stone, the maker would patiently twirl a stick or bone using water and sand as an abrasive element.

Ground stone axes appear in the Neolithic period. They are made in the same fashion as chip-stone axes but there is an added grinding and polishing component. The process is very time-consuming, usually taking an extra four to nine hours to grind. The axes were ground on large flat stones and water was also used in the polishing process. The axe to the right is a beautiful example of polished flint.

These axes were also used for cutting down trees, but were also part of a growing ceremonial and elite burial practice of the Neolithic period. These axes were found in burials, most often for men, as a social status marker and a grave good. Because these axes were so time consuming to make, they were buried with individuals of elite status. 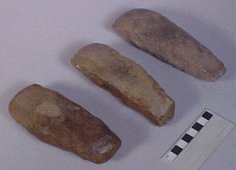 The axes shown to the right are semi-finished stone, perhaps meant to become polished ground stone axes. The flint axe shape was produced by first roughing out the shape through chipping the flint. Conceivably, the process took too long or the material was deemed not fit for the full process to be completed. Another reason why the axes were left unfinished could be because they were part of a burial. In this instance, the time and effort needed to create a ground stone axe would not have been taken because the piece was needed quickly and/or it was going to be buried. According to the donor information, the axe in the middle of the picture above is from a barrow or mound burial in Denmark.

This smaller flint adze was used for woodworking, possibly for bark removal or smaller tasks. It was hafted around the right end of the adze, where the flint is still rough and unpolished. The blade of the adze was polished in similar fashion to the ground stone axe.

The Dagger Period of Scandinavia

Around 2400 BC at the end of the Neolithic, bronze production was well under way in central Europe. Again, Scandinavia was one of the last places in Europe to produce metal goods because of geography and very few natural metal deposits. Through trade networks, metal objects, specifically bronze daggers, influenced Scandinavian flint workers. The Dagger Period of Scandinavia is marked by excellent flint craftsmanship that was not matched anywhere else. Flint workers mastered detailed pressure flaking and started mimicking European bronze daggers. Several of these meticulous flint daggers (Figure 6) have been recovered from burials. They were not functional pieces as much as they were social markers.

This dagger was a flint imitation of bronze daggers and styles reaching Scandinavia from central Europe. The dagger featured above is a Type III dagger which is characterized by a stitched handle, featured in the picture to the right. This stitching, produced by pressure flaking, is unique to this period and area. Another feature of Type III daggers is the square base and handle. The tip of this dagger has been broken off but blades were made by controlled pressure flaking.