The rune stone collection at the Milwaukee Public Museum is comprised of ten replica rune stones. The replicas are smaller reproductions of large rune stones found in Scandinavia. The pieces are made from molded plaster, and then the "engraved" runic inscriptions were painted white.

The original rune stones are often several feet in height and made of granite or other stone material. Most prominently created during the Viking Age (AD 800-AD 1050), there are over 6,000 rune stones known across Scandinavia. The museum’s replica collection consists of fairly well-known rune stones, most originating in Denmark. They can still be seen throughout the Scandinavian landscape. Some of them are displayed in museums and churches that were close to the original placement of the stone. Rune stones served three main functions: memorials for the dead, self-promotion, and religious belief.

Memorial rune stones were created for individuals who died at home and abroad. When prominent people, usually men, died, a stone was erected by family members as a memorial piece. The message usually conveys information about the deceased, who created the stone, and living relatives. Viking raids abroad took the tradition of runic inscriptions as far away as Istanbul. The memorials for those who died far away account for about ten percent of rune stones.

It was a virtue in Viking society to brag about victories, sagas, and personal features. Several stones commemorate wealth, high status, and education. They also were meant to lay claim to certain property and ties to important people.

Another reason for erecting a rune stone was to demonstrate the new Christian belief system which was introduced into Scandinavia around AD 960. Christian crosses and symbols were often added to memorial rune stones. Individuals also publicly proclaimed their new religion by creating a rune stone where they lived and where pagan religion was still evident. The same is true for pagan symbols. When Christianity was the prominent religion of a community, some individuals erected rune stones with pagan symbols as an act of defiance.

The earliest runic inscriptions appeared in the first century AD but most examples of runic text appear later in the tenth and eleventh centuries. The runic alphabet was mainly used by Scandinavians but some examples have been found in other parts of Europe. The true origins of the runic alphabet are not known, but are believed to have been influenced by the Latin alphabet being used in southern Europe at the time. The alphabet is traditionally known as Futhark, which in Old Norse is translated as "text, letter, or inscription."

Runic inscriptions were largely written in a left to right pattern, but early examples vary. The separation of words was usually not specified but some examples demonstrate the use of dots for this purpose. Runic Farthark text went through transitions as the material being inscribed changed. The Elder Farthark is the oldest known runic alphabet and is characterized by straight lines and jagged letters. This is most likely because the inscriptions were carved on wood and the alphabet worked well with the grain. The Younger Furthark alphabet has more curved elements. Once runic inscription was largely used on stone, carvers could easily add more detail to the alphabet and designs. 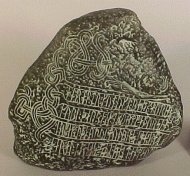 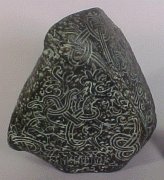 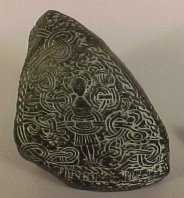 The Great Jelling Rune Stone is located in Jelling, Jütland, Denmark. It is one of the most ornate and magnificent rune stones known in Scandinavia. The original is 2.43 meters high and weighs 10 tons. It rests in its original place, now next to a church and cemetery. It was erected by King Harald, also known as Harald Bluetooth, one of the first kings of Denmark around AD 960. It stands next to the rune stone created by his father, King Gorm, and a large burial mound believed to hold Gorm’s remains.

The stone has three sides, all of which have runic inscriptions and illustrations. The front side (Figure 3) has four lines of text with a double band winding in knots and figure eights. The right side (Figure 4) has the image of a lion with a serpent coiled around its body. There is a small line of runic inscription at the bottom of the image. The left side (Figure 5) depicts the oldest-known image of Christ in Scandinavia and also has one line of text at the bottom of the image.

The runic inscriptions translates as follows:
Front (Figure 3): Harald the King executes
These sepulchral monuments after Gorm his father,
And after Thrya his mother, The
Harald who won the whole of Denmark
Right (Figure 4): And all of Norway
Left (Figure 5): And turned the Danes to Christianity

Along with the runic translations, the images also convey current issues for Harald I and Denmark. Side B depicts a lion (or Jelling beast) fighting a serpent. The Jelling beast is a symbol of royal power. Some believe that Harald I produced the image to commemorate his people and portray strength. The Jelling beast would have been a good image to represent, especially given the recent conquest of Norway.

Side C is the image of Christ with his arms spread out. This image represents the introduction and spread of Christianity in Scandinavia, which was one of last strongholds for pagan religion. Several attempts to Christianize Denmark occurred between the 8th and 10th centuries, but were largely unsuccessful. It was not until King Harald I allowed bishops from Germany to preach in Denmark that Christianity started to spread rapidly. King Harald I himself converted around 965 AD. Most believe that this image was supposed to signal a smooth transition to a new faith in his country. 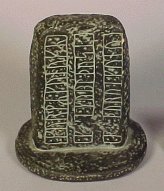 The Little Jelling Rune Stone is also found in Jelling, Jütland, Denmark, next to the Great Jelling Stone. The burial mound near the stone is more closely associated with this rune stone than the Greater Jelling Stone. It was created by King Gorm, also known as Gorm the Old. It is a memorial stone dedicated to his wife Thrya. It translates as follows:
King Gorm made this monument
in memory of Thrya, his wife,
Denmark’s salvation

It is interesting that Harald I mentions his mother in the inscriptions. Women were rarely mentioned on a rune stone, let alone having one dedicated to them. Some believe that both Thyra’s son and husband attached her name on the stones because she was a woman of high status and had some authority over the area. To confirm their power over Denmark, King Gorm and Harald I probably mentioned her on the rune stones to publicize their association with Thrya and her authority.

The Ny Larsker rune stone can be found on the large island of Bornholm, which is a part of Denmark. The original stone measures 260 cm in height and is in the Ny Larsker church. It dates back to AD 1050-1100 and is a memorial stone. The design of the rune stone features a cross and sword. It was erected for a deceased father commemorated by a son. The exact translation could not be found.

The Hørning rune stone is located in Northern Jütland in Denmark. The original is 157 cm high and dates from AD 960-1050. The creator of the stone, Toke the Smith, is also known to have created another rune stone in the same area. This could mean that he was someone who specialized in making rune stones, along with his regular occupation.

The cross on the rune stone is considered to be a St. George’s cross and signifies the new Christian religion. This rune stone was created in the earliest times of the Christian infiltration into Denmark.

The rune stone is a memorial for a superior figure. The runic inscriptions translate as follows:
In memory of Troels, Gudmund’s son, who gave him (Toke the Smith) gold and freedom.

The Føvling rune stone is located in northern Jütland. It is also a memorial piece for a deceased individual. The stone itself is unique for a rune stone because it is meant to be a slab grave stone and did not stand upright. This is indicated by the cross that would be upside down if placed upright. Again, the cross is a symbol of the spread of Christianity throughout Scandinavia. The dates in which the Føvling stone was created would have to have been after AD 960 due to the Christian reference.

The runic inscriptions on this rune stone are considered bind runes. Bind runes are symbols composed of several runes, overlaid, one on top of another, to form a single character. The true purpose for this is unknown, but it is possible that it was the mark of a very talented rune carver, or to encode the message. The translation of the inscription is as follows:
Esbern Langsom (the slow) here lies at rest in Christ.

The original Tune rune stone is the only rune stone represented in this collection from Norway. It is an early rune stone dating to the 5th century AD. It is on display at the University Museum of Antiquities in Oslo, Norway. There are runic inscriptions on the front and back of the original stone but this replica only displays the front side. The inscriptions on the front are read left to right and then right to left, or top to bottom and then bottom to top. The translation of the front inscriptions is as follows:
I widow of Vodurid Lags-Felle created this rune.

There are three lines on the back of the original stone. They also read in a wave pattern. Starting at the right, the text is read from bottom to top, then top to bottom, then bottom to top again. The translation of the inscriptions on the back is as follows:
Three daughters had the stone raised for Vodurid. They held the funeral feast, the main heiresses, as they were. 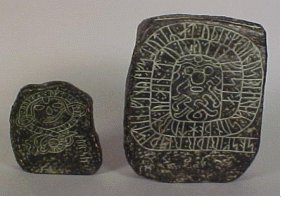 There are 12 known rune stones with face masks in Scandinavia. The masks have been interpreted by some to depict Odin. Odin was the chief god in Norse mythology: he was the god of wisdom, war, battle, and death. Nevertheless, these stones are believed to be connected with the non-Christian belief systems in place before AD 1000.

Rune stones with pagan features are mostly found in Denmark. There is not much information available about Skystad Rune Stone (left) but there is information about the Skern Rune Stone (right). It comes from Denmark and was placed in a cemetery in the area of Viborg. The mask in the center of the stone has a beard, which is interlaced and ornamental. The runic inscription wraps around the mask and also holds a curse in the text. The only information about the creator and the person it memorializes is available through the inscription:
Sasgerd, Finulv’s daughter, erected the stone to Odinkar, Osbjorn’s son, the precious and loyal. A witch the man who ruins this memorial.