The Archaeology and Exploration of Lake Amatitlán

To date, 13 underwater archaeological sites have been found and all but one are in the northern half of the lake. Evidence of ancient agricultural terraces is evident on the hills of the northern and southern shores of Lake Amatitlán, and several Maya archaeological sites have been identified on the shores as well. The order and type of ceramic styles found at a site can provide clues to its age. At Lake Amatitlán the ceramics indicate that the area has been occupied from at least 500 BC, the Middle Pre-Classic period, through to the Spanish conquest in the early 1500s AD. Perhaps the most significant time period was the Early Classic, about 300-700 AD, when ceramic styles indicate there was a strong influence from the central Mexican city of Teotihuacan. The nature of the interaction between Highland Guatemala and Teotihuacan is still being debated, however the underwater site of Lavaderos (site 7) and the land site of Mejicanos (site C) exhibit the most significant similarities to Teotihuacan-style artifacts. 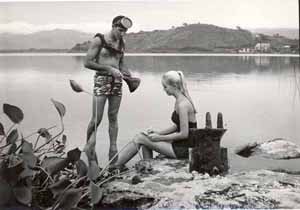 Locals and visitors have been finding archaeological remains, especially censers (vessels for burning incense) and other ceramic vessels, in the lake for many years. Marshall H. Saville of the Museum of the American Indian, Heye Foundation, acquired a large collection of ceramics, as well as some stone artifacts, from the lake in 1917. Many of these are now at the National Museum of the American Indian, while the remaining pieces from that original collection were destroyed in an earthquake while in storage in Guatemala before they were taken to the Peabody Museum of Harvard (Borhegyi 1969: 267). Local fishermen would snag the ceramics in their nets or go searching for them when lake levels were low and sell them to tourists in the 1920s and 1930s (Berlo 1984: 144).

Dr. Stephan F. de Borhegyi was teaching summer classes in Maya archaeology and ethnology at San Carlos University of Guatemala when he first heard of the discoveries at Lake Amatitlán in 1957. He contacted the discoverers and made plans for the students to systematically explore the lake and shores, creating a preliminary map. Objects that had already been collected were photographed (Borhegyi 1957). In the summer of 1958, Borhegyi led students from San Carlos University and the University of Oklahoma in surveying and mapping sites in the vicinity of Lake Amatitlán and diving in the lake to recover and photograph specimens (Borhegyi 1958). 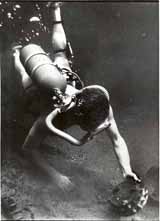 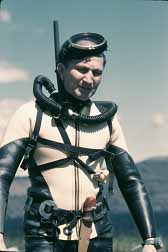 Two new underwater sites were discovered that year. One, called Yacht Club (site 2A) is located near the establishment by that same name, and the other, El Zarzal (site 7) was found at the northernmost extension of the lake. In addition, dry land sites Contreras Alto (site D1) and Los Jicaques (site D2) were discovered on the slopes above the previously known site Contreras (site B), while lakeshore sites Contreras, Mejicanos (site C) and Amatitlán (site A) were remapped. Guatemalan photographer Joya Hairs took photos of many objects from the lake that were held by private collectors. Copies of most of the photos are in Dr. Borhegyi's archives at the Milwaukee Public Museum.

In January 1960, Borhegyi returned to Lake Amatitlán with support from the Milwaukee Public Museum to continue research (Borhegyi 1960a, 1960b). The six Americans, Dr. Borhegyi and his wife Suzanne, Milwaukee Public Museum photographer Leo Johnson, divers Lon Mericle and Vern Burkart, and Peter Jensen, archaeologist and curator of the St. Paul Science Museum, teamed with Guatemalan divers Dr. Guillermo Mata Amado, Enrique Salazar, and Luis Canela to extensively map and explore the Lake Amatitlán area. Recent plowing left the extent of the land sites more clear, so Mejicanos (site C), Amatitlan (site A), and Yacht Club (site B) were remapped. Six underwater sites were explored at this time. Recovery of artifacts from Lavaderos (site 1), Agua Caliente (site 1A), El Zarzal (site 7 and 7A), Yacht Club (site 2), and Bahia (site 3) continued, and Los Organos (site 6A) was investigated for the first time, having just been discovered by Guatemalan diver Enrique Salazar. Borhegyi reported 208 artifacts collected from sites in Lake Amatitlán. The team also spent time investigating some of the other lakes in Guatemala, including Lake Atitlán (Sololá Dept), Lake Ixpaco (Santa Rosa Dept), and Lake Atescatempa (Jutiapa Dept). Many photos of the activities of the summer were taken and are archived at the Milwaukee Public Museum.

In January 1962, Borhegyi and Mata Amado worked to survey and map the area above the Mata site (site 9), the only underwater site in the eastern half of the lake (Mata Amado 1964:65, 1975: 12). Borhegyi's summer 1963 field season was sponsored by the National Science Foundation. During this time he worked at Mejicanos, where a cache consisting of a Spondylus princeps shell containing a jadeite bead was found inside an Esperanza Fleshware cylinder tripod vessel. This shell has yielded the only C-14 date for the Lake Amatitlán area. Calculated by the University of Michigan (M-1580), the date obtained was 1300 ± 130, yielding a calibrated date of AD 650 ± 130 years (Crane and Griffin 1966: 282, Borhegyi 1967: 221). Another attempt to date the finds in Lake Amatitlán was unsuccessful.